We were contacted by a seller in Oregon that sent us pictures of his newly acquired 2007 Ford Mustang Steve Saleen-Parnelli Jones limited edition. He only sent us 4 pictures that he quickly snapped with his phone, so you’ll have to excuse us for now.  So why are we sharing with such incomplete information? Well, even though a 2007 Mustang is hardly a classic, they only made 500 of them so if you’ve been looking, we wanted to get the word out now.  This will be coming to auction very soon here on Second Daily…stay tuned. Back in 2007, Ford announced they were resurrecting the Boss 302 name in memory of the original G-codes that were produced in 1969-1970 (the “G” is the 5th digit of the VIN for these). It was to be introduced as a 2008 model, but little did the public know at the time you could get the Saleen-Parnelli edition now (well, then). The original MSRP of $61,565 bought you 1 of the the 500 limited editions, complete with Steve Saleen’s and Parnelli Jones’ sharpie scribble on the dash.  If you haven’t heard of him, Jones was a former Indy 500 winner, and winner of many sprint-car, stock-car, and Baja truck races.  He drove a Boss 302 to the 1970 SCCA Trans-Am title as well, besting the times of legendary racers Mark Donohue, Dan Gurney, Sam Posey, and George Follmer. All of the powertrain and chassis extras are here…including a 3.73:1 rearend, a Tremec five-speed manual, Saleen N2 dampers and linear-rate coil springs, a Watts Linkage on the live rear axle, 14-inch slotted front brake discs with four-piston calipers, and the requisite 302-cubic-inch, 24-valve Ford V-8 The original G-codes were designed primarily for use in the SCCA Trans Am racing series, and the 4.9L Ford V8 was really a crossbreeding of the 302 Windsor short-block and the then-new 351 Cleveland heads.  Originally designed by former racer Larry Shinoda, who inadvertently was taken from GM specifically for the task, the public soaked it up and bought 1,628 of them in 1969 and another 7,014 in 1970. 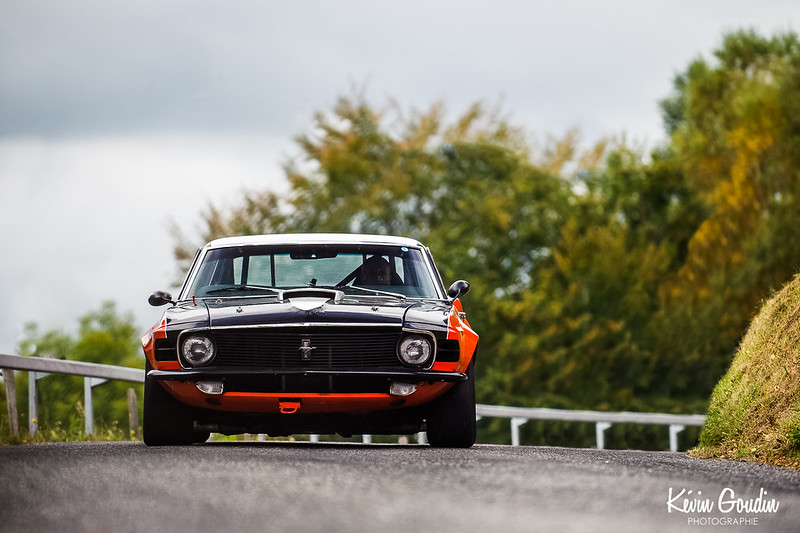 Cover and this photo credit to www.kevingoudin.com

Only 4 colors were optioned in 1969…Bright Yellow, Calypso Coral, Acapulco Blue, and Wimbledon White (in order of most to least produced).  They would offer 17 colors the following year…interestingly the registry states that only 1 was ever made in Bright Blue Metallic (paint code #6).  We didn’t find any records of recent sales of this one, so if you have more information on it please write to us. In case you’re wondering, no Ford did not go on to produce the Boss 302 in 2008 as they originally promised.  It would take them another 4 years to launch it as a 2012 edition.  And in case you’re also wondering…yes, Grabber Orange was an original paint code (code: U) on the street-legal version of the 302 Boss, of which 832 were made.  It was the color of choice for Jones.  He couldn’t get the media to recognize him, as his black car simply wasn’t a stand out…so what do you do?  You paint it orange to grab their attention. When we get more information on the 2007 Boss 302 for sale, we’ll be sure to pass it along.  Check back with us if you are interested, the car is located in Oregon with a reported 88k miles and 2 owners.