About 20 years ago, Mercedes-Benz signed a deal with the U.S. Open Tennis Championship making them a major sponsor throughout this partnership and allowing them to hang the 3-pointed star on the nets during prime time (side quiz…anyone know what the logo means?  No internetting allowed).  This engagement is a pretty sweet deal for the players…free swag, usage of the fleet cars while they’re there, parking privileges…the life of a professional tennis player.  In 2009, MB committed $35M to the cause…and just recently resigned the deal showing their commitment to tennis in hopes of pulling in the affluent consumers. About 50 years ago, Mercedes-Benz engineers Hans Werner Aufrecht and Erhard Melcher came together to build a racing engine for the automaker, and would label under the name AMG, for Aufrecht, Melcher and Großaspach (Aufrecht’s birth town).  Prior to actually making an AMG car, they mostly focused on engine and other upgrades for the brand.  Through the 1980s and up until 1990, AMG offered engine performance and styling packages as an independent company from Benz. That is, until about 25 years ago. Mercedes knew it was slipping in the performance market, it simply couldn’t keep pace with the M3. Benz and AMG would soon sign a contract allowing AMG to use the worldwide dealer network to market and sell their cars. The first real AMG car is purported to be the 3.6L 276hp C36 AMG.  Made from 1994 – 1997 (even still, this is debatable) and built on the W202 chassis, the C36 AMG would give MB the success they needed. 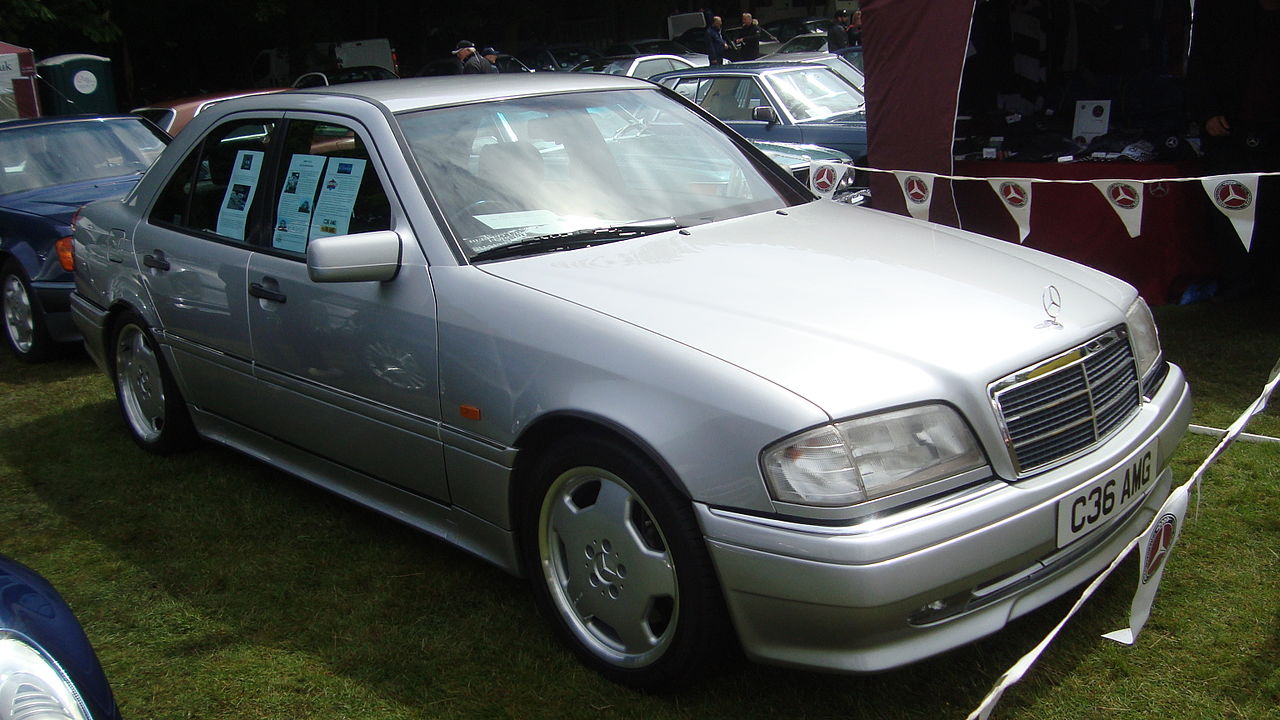 The other good news?  Reader Ryan France wrote in with an unbelievable story of how he came to own one.  He had been following a particular C36 AMG between owners on Craigslist for about two years. As luck would have it, it came up for sale near him about two years ago.  At the time, it only had about 150k miles and was fully functional and running. The price tag though prevented him from jumping on it. Another 6 months or so goes by, again sees it on Craigslist but this time with a blown engine.  Without the funds to put it back together as it should be done with an original AMG engine, he again let it pass. Three months later it shows up again, this time with a replacement engine but running like a diesel tractor on regular petrol. Yep, you guessed it…he passes again on it. Fast forward through two more Craigslist listings and two more owners, he finally snags it for a wallet-breaking $1,700…complete with a genuine AMG low mileage engine though still not running correctly. After months of rewiring the hacked engine harness, replacing missing sensors, and an intake cam swap, it still wouldn’t run over 3,500 rpm or break the 60mph barrier.  In similar patience as it took to acquire the car, Ryan finally discovers bent reluctor teeth on the flywheel.  A $12 pair of Vise-grips later…it pulls hard to 7k rpm and finally runs as the A-M guys originally envisioned their brand. So as you watch the remaining games in New York, think about the players being escorted around in a car with a partnership that began over 50 years ago…one that has solidified Mercedes as a legitimate performance brand with a racing heritage.  And think about Ryan, his patience and his $12 pliers repairing what so many ASE certified technicians before him couldn’t.